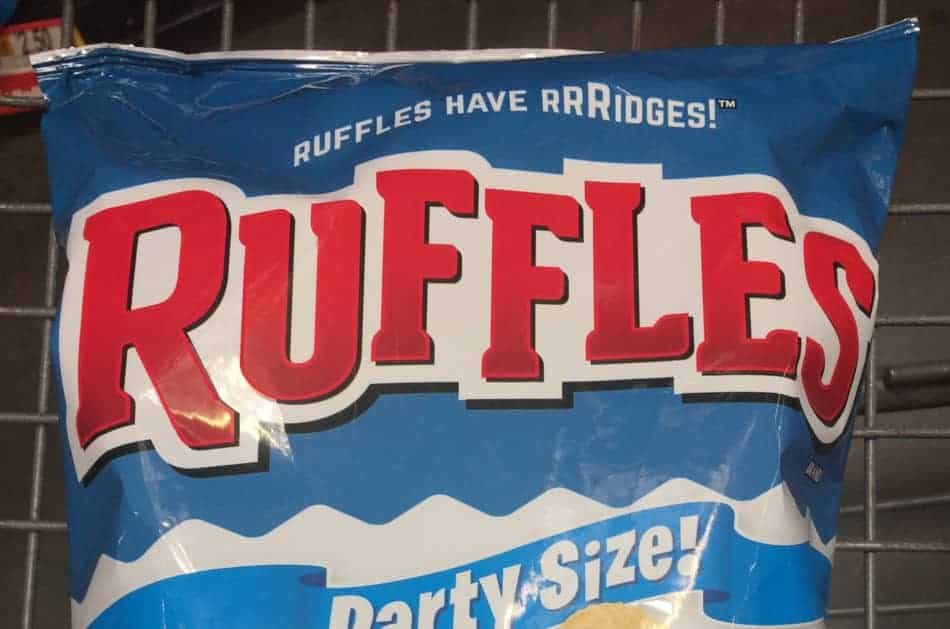 Ruffles is a brand of crinkle-cut potato chips put out by Frito-Lay. The brand of snack food has been around for several decades now.1,2 Because they’ve been around for so long, a lot of vegans grew up eating the snack and want to know if they can continue to do so after switching to a 100% plant-based diet.

Are they vegan? The original Ruffles are vegan. They simply contain potatoes, vegetable oil, and salt.3 As with most product lines, there are several flavors on offer by the brand and some varieties are vegan while others contain animal-derive ingredients.

In the case of Ruffles, most are non-vegan.

What we’ll do here is go over a list of both vegan and non-vegan flavors. Warning: overall, Ruffles are among the least vegan-friendly chip brands on the market. Almost every flavor contains milk in one form or another. You’ll notice, the brand really loves cheese.

So, brace yourself, because the list of vegan-friendly flavors is about 1/3 the length of non-vegan flavors.

These were just mentioned, but for the sake of completeness we’ll list them here. The original contains just three basic ingredients: potatoes, vegetable oils (corn, sunflower, and/or canola), and salt.3

All Dressed (My Favorite)

I was very surprised to find out these were vegan. According to Wikipedia, all-dressed, or assaisonnées in French, is a popular Canadian potato chip flavor that combines barbecue, ketchup, salt and vinegar, and the common non-vegan flavor profile: sour cream and onion.4,5

Apparently, Ruffles decided to skip out on the sour cream—which is good news for vegans.

Not a trace of cheese in sight. They seem to achieve the cheesy flavor from the torula yeast and MSG. Yeast has long been a favorite for use as a vegan cheese alternative.

These contain potatoes, vegetable oils (canola, sunflower, and/or corn), and a Tapatio “limon” seasoning which includes:7

Red 40 Lake and Yellow 6 Lake are both vegan-friendly food colorants, so no problems there.

That’s it for the vegan flavors. A short list, I know. You may be wondering where the BBQ is. If you remember from above, BBQ is actually part of the all dressed flavor profile, so I suppose that’s the only BBQ flavor available for now.

These contain the usual ingredients (potatoes and oil) plus:8

Whey protein pops up in pretty much every non-vegan flavor. It’s the second most abundant protein in milk. It has a lot of useful properties, so it is extracted out of dairy products by the food industry to be used in various food products.

These contain the usual ingredients plus a “Flamin’ Hot Seasoning” which includes:9

Oddly, jalapeno is usually a red flag in processed food products like chips, even when it’s not paired with ranch. For whatever reason, food manufacturers like to give jalapeno flavored foods a creamy texture and mouthfeel, so they usually throw milk derivatives into the mix.

These include a Jalapeño Ranch Seasoning which contains:10

This flavor is about as non-vegan as you can get.

This is a classic flavor profile and was always my favorite chip flavor growing up. Fortunately, there are several vegan-friendly “sour cream” and onion snacks on the market. I use quotes because they don’t use actual dairy products, but use plant-based seasoning blends instead.

Finally, we have Queso Cheese which seems kind of redundant. Maybe it’s double cheese—which would make it doubly off-limits for vegans.

That’s it for the vegan status of Ruffles. Thanks for reading.