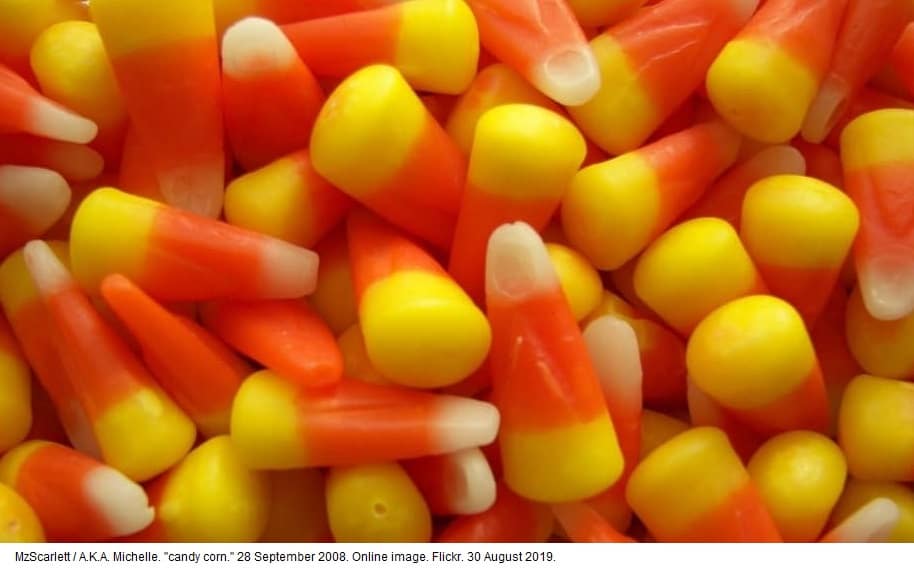 Candy corn is a very popular confection found widely in the US and Canada, especially around Halloween.1 They’re little pieces (about three times the size of an actual kernel of corn) with a three-color pattern—yellow at the base, orange in the center, and a pointed white tip giving it the appearance of a kernel of corn.2

Are they vegan? No, candy corn is not vegan. It contains a number of non-vegan ingredients, all of which involve insect-derived byproducts.

That’s not to say it’s impossible to find any. There may well be vegan-friendly candy corn specialty products or some obscure brand that offers an “accidentally vegan” version of the treat, but I’ve scanned countless labels, and have yet to find any that are completely vegan-friendly.

Why Candy Corn Is Non-Vegan

There are a number of non-vegan ingredients that tend to be present in candy corn. Not every variety contains each ingredient, but all I’ve run across contain, at least, one.

I’ve run across beeswax a few times when scanning the labels.

Honey, though obviously not as common as corn syrup, is somewhat prevalent as an ingredient in candy corn. The Brach’s Classic Candy Corn contains honey as well as sugar and corn syrup along with the usual ingredients (oils, artificial flavors, etc.).4

Honey is problematic for vegans and is mentioned in PETA’s list of non-vegan ingredients.5 It’s obtained from wild or domesticated bee colonies that, on average, produce about 65 pounds (or 29 kg) of honey per year.6

There are several inhumane practices used to cultivate and harvest honey including wing snipping and artificial insemination of the queen bee.6 We needn’t go over it here, but just know that the substance is considered unsuitable for vegans.

Gelatin is a flavorless, translucent, colorless ingredient, derived from the protein collagen which is found abundantly in body parts (the epidermis of the skin, etc.).

Commercially, gelatin is made from animal by-products of the meat and leather industries. Most gelatin is derived from split cattle hides, pork skins, and the bones of cattle and pork.7

Like egg protein (albumen), it’s commonly used as an aerator to achieve a chewy texture in candy making. Obviously, gelatin is off-limits for vegans.

Confectioner’s glaze is probably the most common ingredient in candy corn that many consider to be non-vegan.

This is just one example, but pretty much every bag of candy corn I’ve come across thus far contains the stuff.

Confectioner’s glaze derives from a substance secreted by lac bugs as they traverse tree trunks and branches.9

It’s mostly made up of tree sap. Lac bugs suck up the sap and use it to secrete sticklac at which point shellac is processed out for use in food products, etc. The bugs use the substance to create mini-cocoon-like structures, though they’re not considered cocoons in the entomological sense.10

I’m not saying that no vegans consume products containing confectioner’s glaze, but the substance is considered to be non-vegan by many in the community. It’s been estimated to take anywhere from 50,000 to 300,000 lac bugs in order to produce only one kilogram (2.2 lb) of shellac.11-13

Anyway, whether you consume confectioner’s glaze or not, it’s only one of many ingredients in candy corn considered problematic for vegans.

This one is less common, but you will run across it quite often in candy corn. Egg white is a favorite for use in chewy candies because it aerates really well and helps give candy a light and elastic texture.

Egg white may also be listed as egg albumen as the two are often synonymous with each other. It’s a substance largely composed of protein and water and accounts for over 50% of an egg’s weight. Albumin (with an “i”) is the protein content of the egg white.14

Like gelatin, it’s used as an aerator that, to help achieve a chewy texture in candy making.15

Candies like nougat usually make use of such aerators which is why it can be so hard to find vegan versions of chewy candy.16

Soy protein is another aerator that would be suitable for vegans, but it’s much less common in mainstream candy making compared to egg white and gelatin.17

That’s it for candy corn. Thanks for reading.