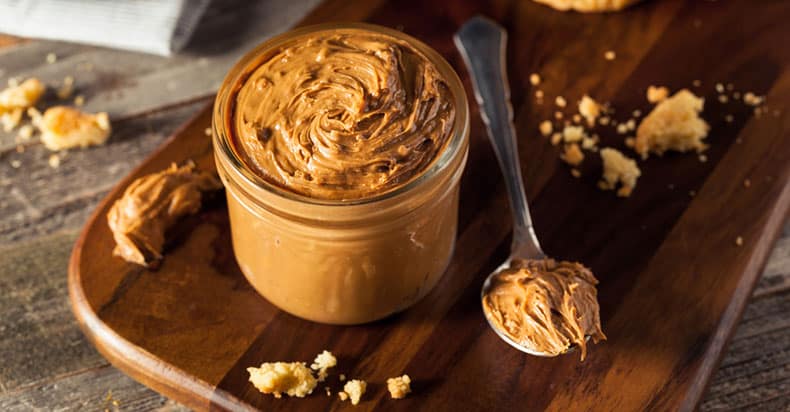 Cookie butter is a tasty treat used as a dip and spread. It’s extremely popular these days, so much so that Trader Joe’s has, or at least used to, enforced a limit of two jars per person. Because it’s so mainstream now, many in the plant-based community want to know if they can partake.

Also, the emphasis will be on the vegan-status of cookie butter, because anything vegan is by definition vegetarian.

Since most cookie dough is non-vegan, folks often wonder if this trend extends to cookie butter, mostly because it’s not really clear what the difference is between the two—other than what they’re used for, the former being baked or consumed raw with the latter being used as a spread.

Cookie butter is a dough-like substance, but the flour portion is sourced from cookies that have already been baked and ground into a powder. Oils, syrups, flavors, and additives are then added.

The cookies used are known as speculoos, but in the US they’re often referred to by their brand, Biscoff. This is because Lotus Bakeries (Lotus Biscoff in most countries) popularized the type of cookie.

Cookie dough, on the other hand, refers to a blend of ingredients used to make the cookies in the first place. So it’s a mix of wet and dry ingredients that has yet to be cooked.

When made at home, recipes for cookie dough call for flour, butter or margarine, sugar (white and sometimes brown), salt, baking powder or baking soda, vanilla extract, and whole eggs.

This kind can be egg-free, it just depends. To prevent salmonella-induced foodborne illness from consuming raw cookie dough, manufacturers either omit eggs altogether or use pasteurized eggs.1

Is the presence of egg an issue for cookie butter?

Homemade cookies usually call for eggs because they help bind and emulsify ingredients and provides a water source for leavening (via steam).

One Caveat: Ingredients Can Vary By Region

Cookie butter, in one form or another, has been around for some time. It’s just that the US has been obsessed with it as of late—since around 2015.2,3

So, it didn’t originate in North America, but in Belgium in 2007 which is why Lotus Biscoff is the most widely recognized brand worldwide, with Trader Joe’s being the most popular in the US.4,5

I bring this up because it’s something to consider depending on where you live. For example, it’s a popular ingredient for some cakes and, in Sweden, cookie butter is the main ingredient in a dish called Punsch-rolls.

In Denmark, a version of cookie butter known as trøffel-masse is used for some confectionery cakes sold in bakeries.

Anyway, these versions come with a number of extra ingredients, some of which may or may not be vegan.

Why Most Commercial Cookie Butter Is Vegan And Vegetarian

Fortunately for vegan junk food lovers, the actual cookie portion of highly-processed cookies (i.e. other than the extra ingredients like chocolate chips which can vary) tends not to be made with eggs or dairy.

Highly-processed snack foods in general usually make use of plant-based oils instead of butter because they’re more shelf-stable.

It’s the extra ingredients that are usually to blame if a particular cookie has animal products. For example, Chips Ahoy cookies are almost vegan but for the chocolate chips which contain dairy.

Some processed cookies with extra ingredients turn out to be vegan, as is the case with Oreo’s which are probably the most popular “accidentally vegan” cookie—they’re vegan despite containing “cream”.

Since commercial cookie butter is a food paste made primarily from crumbled up processed chocolate chipless cookies (speculoos in this case), the product is usually accidentally vegan by most standards.

Other ingredients are added, but they tend to be vegan-friendly—namely, sugar, extra flour, and vegetable oils.

As mentioned, the same can’t always be said for homemade cookie butter. While many recipes call for processed cookie crumbs that are likely to be vegan, other ingredients are often added.

Since cookie butter requires an additional fat source (other than the fat already contained in the cookie crumbs), it’s not uncommon for butter to be used in place of oil.

It’s not always the case that butter is used to replace plain vegetable oils, because margarine (processed vegetable oil) is also common. Then again, not all margarine is free of dairy additives, so you have to be careful either way.

For more info on that, check out the article on the vegan status of margarine.

Then there’s sweetened condensed milk. I’m not sure why, but it’s not uncommon for recipes on blogs and videos to list this ingredient.

Of course, the above ingredients are only an issue when it comes to eating cookie butter prepared by someone else. If you’re looking to make your own, I’m sure that a simple internet search will show countless vegan-friendly cookie butter recipes.

Trader Joe’s cookie butter is considered vegan even by strict standards. This goes for both the creamy and crunchy varieties. While the two versions use somewhat different ingredients, both are free of eggs, dairy, and non-vegan emulsifiers.

Above I said that these are vegan even by some strict standards. For example, they state that the mono- and diglycerides are vegetable-based, which isn’t usually specified.

Most mono- and diglycerides are vegan-friendly, but unless stated otherwise, there’s always the chance that they’re sourced from animal-derived triglycerides found in fat tissue.

The same goes for lecithin which is a common emulsifier. While it’s almost always vegan, it is present in egg yolk so there’s always that doubt if the ingredients panel simply lists “lecithin” without naming the source.

You may have noticed here that no distinction is made for the lecithin source. In this case, it’s safe to assume it’s vegan-friendly given that Trader Joe’s went out of their way to make it clear that the original creamy version is animal-product free.

Palm oil might be an issue for some reading this article. While it’s true that the cultivation of palm oil has damaging effects on the environment, the ingredient is not considered non-vegan because it is 100% plant-based.

That should do it. If you’re like me, I’m sure you’re glad to hear that most, if not all, of the cookie butter found for sale in stores and online, is considered vegan by most standards.

Some in the community do like to avoid certain ingredients like palm oil. If that’s you, then you’ll probably want to stick to a whole food diet or use products that are certified vegan.

Homemade cookie butter, on the other hand, can often be non-vegan because butter and sweetened condensed milk are often called for. If you’re making the cookie butter, then the fix is easy—just replace the ingredients with vegan-friendly alternatives.