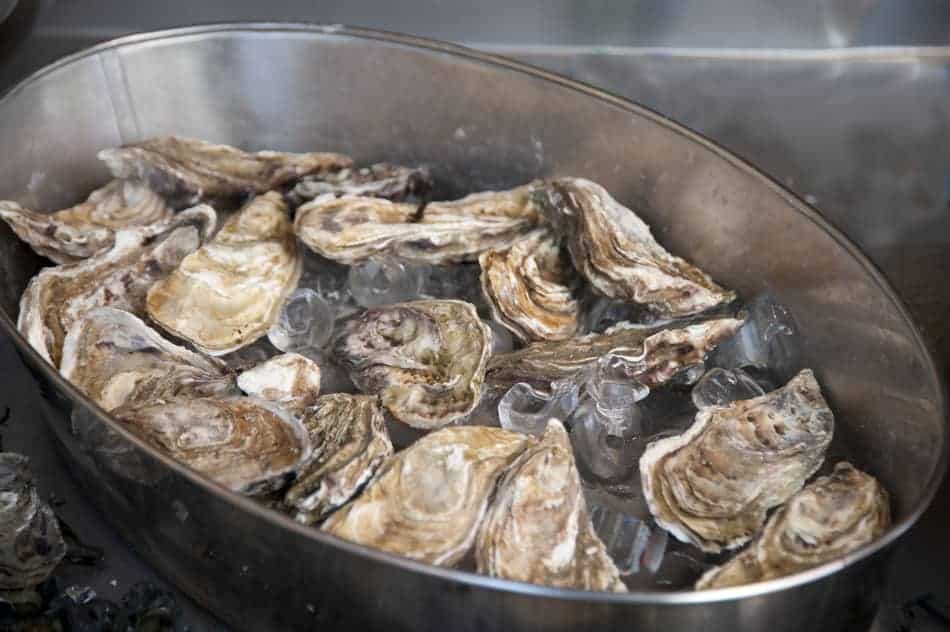 Oyster sauce is a popular dark brown viscous condiment. It’s common in Thai, Cantonese, Malay, Khmer, and Vietnamese cuisine. As you can imagine, there are numerous versions of the sauce, so the term is used to describe a number of condiments.

But, they all have the same base ingredient—for the most part, they vary in the way in which they’re prepared and the spices/ingredients used.

Is it vegan or vegetarian? No, oyster sauce is not considered vegan by most standards. It can be suitable for some vegetarians (e.g. pescatarians). While it’s true that some influential “vegans” endorse, or at least used to endorse, the consumption of bivalves, the practice is largely discouraged in the vegan community.1-3

Anyway, it’s a common question. After all, oyster sauce has been around since the late 1800s.4,5

Because it’s been around for so long, it’s likely that a lot of vegans grew up consuming it and want to know if they have to give up the sauce after switching to a 100% plant-based diet.

Why Oyster Sauce Is Considered Non-Vegan

Oyster Sauce Is Made of… You Guessed it: Oysters

Corn dogs might not contain real dogs, but the oyster sauce is made of actual oyster—or oyster extracts.6-8

Other ingredients include water, along with sugar, salt, and cornstarch (for thickening). High-quality, all-natural oyster sauce is naturally dark brown, but the lower quality stuff often requires the use of caramel color (a natural food coloring agent) to achieve the desired color.9

Manufacturers slowly simmer the oysters in water to the point where the juices caramelize into a thick, dark, and potently flavourful sauce.

That’s how the sauce is traditionally made, anyway. Nowadays, a lot of shortcuts are used to create the desired strong flavor at a reduced cost.

Other ingredients can also be added, such as MSG and soy sauce, both of which bring out the flavor and darken the color.10

This one is less obvious because there was a time when certain influential voices in the vegan community gave oysters the green light.

Peter Singer of Animal Liberation, for example, has gone back and forth on the issue over the years.2

Also, the issue as to whether vegans consume fish and marine life, in general, is often far from evident to new vegans, and folks who are researching plant-based diets for the first time.

There are so many different plant-based diets so it can be pretty daunting to newcomers.

For one, there’s a version of the traditional vegetarian diet known as pescetarianism. These folks largely eat plant-based foods but allow fish and seafood as the only source of meat protein. Some consume eggs and dairy as well.

To clear this issue up, just know that there’s no such thing as a pesca-vegan.

The main reason that some vegans have considered oysters to be a potential food source, is that bivalves (oysters, clams, scallops, etc.) are thought to have rudimentary nervous systems, and thus wouldn’t be capable of experiencing physical pain or emotional suffering.

A bivalve, by the way, is an aquatic mollusk having a body enclosed within a hinged shell, such as clams, mussels, oysters, and scallops.

The presence of pain in an animal is inferred, by experts, on the basis of consciousness which is deduced from behavioral and physical reactions as well as comparative brain physiology.11,12

Most definitions of pain involve the nervous system’s ability to detect and react to harmful stimuli through avoidance behaviors, along with the ability to experience suffering.

Criteria can vary but usually involves:13

Opioid peptides and receptors have long been known to exist in invertebrates and most experts take their presence coupled with related behavioral and physiological responses to indicate that “lower” invertebrates likely experience pain.14-16

Since oysters feel pain, then there are animal welfare implications regarding how they should be treated, and whether or not we, as vegans, should consume them.

Finally, folks often assume the vegan diet to primarily be a health thing. Sure, a huge section of the community is largely interested in health. But, the vegan diet is primarily concerned with the ethical treatment of animals.

Anyone who claims to be a vegan, but occasionally consumes animals would fall into the flexitarian or semi-vegetarian category of plant-based diets—not the vegan category.

After all, what separates veganism from other forms of vegetarianism, is strict abstinence from the consumption and use of animal products.17

Is There a Vegan-Friendly Oyster Sauce?

While there is a vegan “fish” sauce, I haven’t been able to find any vegan oyster sauce.

Soy sauce is a great, widely available alternative. It resembles oyster sauce because it’s made with most of the same ingredients that are added to the oyster extracts—namely, salt, spices, and wheat or maltodextrin.

Annie’s Worcestershire (a vegan product) is a good substitute because, like oyster sauce, it also contains sugar.

You can check out the articles on fish sauce* and Worcestershire sauce*. I go over their vegan status and list a couple of plant-based versions of the condiments.