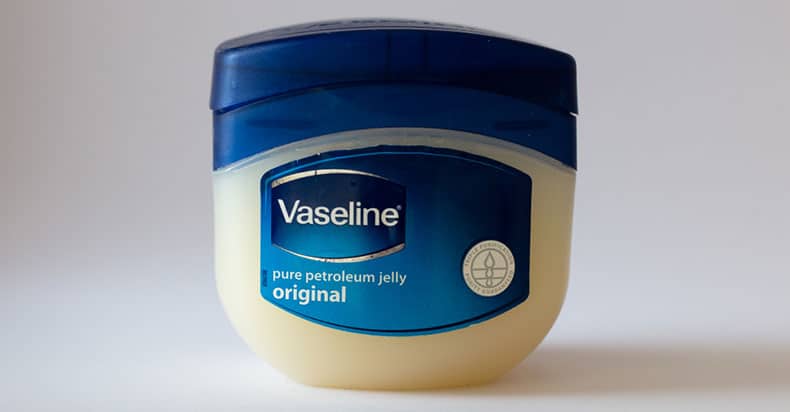 Today we’ll be looking at whether Vaseline or petroleum jelly are considered vegan. I.e. whether or not they’re derived from animals in any way, as well as whether any aspects of the production could potentially pose problems for vegan consumers.

Are they vegan? Yes, Vaseline, or petroleum jelly, is considered vegan by most standards. The translucent hydrocarbon-based material is simply a byproduct of the petroleum industry. Thus, not containing any animal-derived products, the substance is technically considered vegan.

However, the absence of animal products doesn’t necessarily render a substance suitable for all vegans, because the production also has to be taken into consideration and vegans vary quite a bit in terms of what they’re willing to accept on that front.

For example, was the product produced using animals, was it tested on animals, etc. And that’s what we’ll be looking at in the rest of this article.

Are Petroleum Jelly And Vaseline The Same Thing?

You may have noticed that I used the term Vaseline and petroleum jelly interchangeably above. This is because Vaseline is simply a name brand. Being the most recognizable brand, it’s often used synonymously with petroleum jelly.

But, though they’re the same, the distinction could be useful when assessing the vegan-friendliness of the product, if the production of Vaseline involved processes not typically present in the making of generic petroleum jelly, or vice versa.

Also, Vaseline puts out countless products these days each with its own set of ingredients some of which could be problematic. So, if one were using Vaseline to refer to all products put out by the brand, this would complicate things further. More on this later.

However, I’d imagine that most reading this article would be inquiring about petroleum jelly, so that’s what I’ll be referring to from here on out when I mention Vaseline.

Vaseline is cruelty-free while generic petroleum jelly may or may not be depending on the specific manufacturer. Testing on animals is always a possibility when it comes to cosmetics in general, and petroleum jelly is sometimes purified with animal byproducts.

This may seem like the same question (is it vegan?), but it’s not. Almost any product involves a practice in its production that can be traced back to some form of cruelty. In other words, most products are not 100% cruelty-free.

In everyday usage, when something is deemed cruelty-free, it usually just means that the product is made in a way that’s largely free of animal exploitation.

Sometimes the definition is narrower, referring only to the absence of animal testing for a given product. But in the animal rights movement, the label is used more broadly to refer to activities and products that don’t harm or kill animals.

So, how is petroleum jelly made?

Regardless of the brand name, petroleum jelly is a mixture of long hydrocarbons—which is why it makes such a great non-irritating moisturizer for the skin.

Chains of hydrocarbons compose molecules that are far too big to be absorbed by the skin, allowing the substance to form a protective barrier preventing moisture loss, etc.

Its ability to reduce moisture loss has made it a favorite for use in products made to prevent chapped lips and hands, and soften nail cuticles. It prevents chilling of the face caused by moisture loss during cold weather.

Nowadays, it’s come to replace the use of animal-derived substances like beeswax.

Petroleum jelly is derived from a waxy substance that forms on oil rigs that’s harvested and processed and purified, etc.

This brings us to our first potential problem.

In short, Vaseline is never processed with bone char. While generic petroleum jelly can be made using bone char, the process seems to be used less these days. It just depends on the manufacturer.

In researching this article, I reached out to Vaseline Consumer Services asking them if their petroleum jelly is processed with bone char and they responded with a simple “no.”

In case you’re new to the subject, there are several substances widely consumed by vegans—namely, white sugar—that are purified with the help of bone char, a substance derived from animals that’s used for removing impurities.

It turns out that some petroleum jelly products have been processed with bone char.1,5

However, this fact hasn’t resulted in any widespread shunning of the substance in the vegan community.

For one, most vegans consume processed sugar and products containing white sugar, which is always processed with bone char, at least here in the US. The only way around this is to opt for organic sugar, a practice that’s far from universal in the vegan community.

So, if most vegans are okay with processed sugar it stands to reason that most would be okay with other items that may or may not have used bone char.

Secondly, it’s thought that bone char is rarely used in the processing of petroleum jelly products these days. Technology has come a long way, and there are more efficient purification methods nowadays.

As discussed below, Dr. Greger of Nutrition Facts fame seems to endorse the use of petroleum jelly for skin issues. That’s not to say that everything Dr. Greger promotes is vegan (he’s more on the health side of things), but it’s always useful to look at what plant-based gurus and influencers condone to get a good idea of what the vegan community at large feels about a given product.

Is Vaseline/Petroleum Jelly Tested on Animals?

Vaseline is not tested on animals.3 This goes for all of their products including the basic petroleum jelly. Makers of generic petroleum jelly may use animal testing. The only way to know for sure is to contact the manufacturers.

I reached out to Unilever, the manufacturers of Vaseline, inquiring about the use of animal testing on their products and they replied with the following:

“We do not test our products on animals and are committed to ending animal testing. Unilever has complied with the EU animal testing bans for cosmetics since 2004 and supports calls for similar bans to be introduced globally. To learn more about our position and our work on non-animal approaches, please see our website.”

The website referred to is Unilever, the link for which is listed below.

What About The Environmental Impact?

As you know by now, a lot of folks adopt a plant-based diet due to concerns around the environment. These folks are often referred to as environmental vegetarians or “eco vegans”.

Eco veganism is a strict form of environmental vegetarianism, which is the practice of vegetarianism in order to create a sustainable diet. The omission of meat is meant to mitigate and even reverse the negative impact of meat production on the environment.

Livestock as a whole is estimated to be responsible for around 18% of global greenhouse gas emissions.

Of course, even those who don’t follow a vegan diet primarily for this reason are often still concerned about the effects of everyday food and household items on the environment.4

If you identify as an eco vegan or environmental vegetarian, you may want to avoid purchasing anything that’s a byproduct of the fossil fuel industry.

It should be noted that this is a unique set of concerns that’s not relevant to all in the vegan community.

It is true that the fossil fuel industry has effects that devastate the environment, polluting the air and water, which affects the wellbeing of animals. So, the two domains of concern are intertwined.

Ultimately it comes down to a personal choice. Just know that not all environmentally-driven vegans and vegetarians go to extreme lengths to eliminate all petroleum-derived products—products that are difficult to eliminate as they are ubiquitous in everyday life in the form of plastics, gasoline, etc.

The image of protesters using petroleum-based kayaks to paddle out to an oil rig to stage a protest comes to mind. It’s not hypocritical for those who are concerned with the environment to take part in practices that are ultimately bad for the ecosystem.

Most activists view the consumption of gasoline and petroleum-based products as a necessary evil.

But, if you want to go the extra mile by avoiding petroleum jelly, there are alternatives. For example, I’ve known several folks to grow their own aloe vera plant to use as a moisturizer. Of course, petroleum jelly is used for a variety of reasons, so the reason for using the product will determine which replacement is suitable.

So, petroleum jelly is generally considered suitable for vegans. Vaseline, specifically, meets the criteria for being vegan and cruelty-free in every respect. Generic petroleum jelly is seen as acceptable by most in the vegan community.

This sentiment that petroleum jelly is generally okay for vegan use is reflected in PETA’s list of vegan and non-vegan ingredients where paraffin and other petroleum derivatives are mentioned as alternatives for common animal-derived products.3

The beloved Dr. Greger of Nutrition Facts often promotes petroleum jelly as an effective replacement for lotions and skin creams.6

That sums it up for now. Thanks for reading.