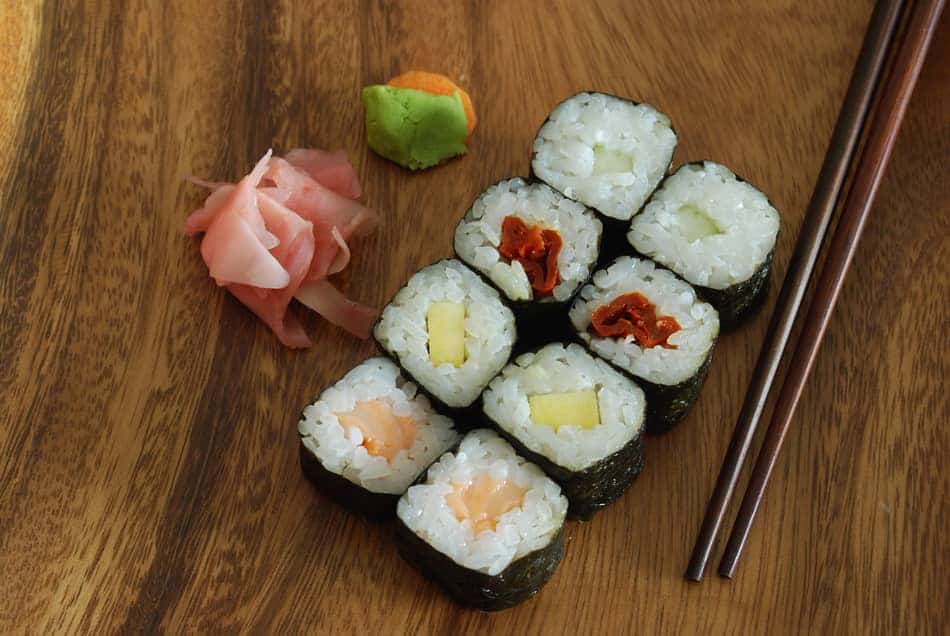 Sushi is a Japanese food that has been growing in popularity over the years. In fact, it’s so popular that you can buy it at almost any location that serves food, from five-star restaurants to grocery stores, gas stations and truck stops.

Is it vegan? Surprisingly, sushi can be vegan. While, the term “sushi” is often synonymous with raw fish, the Merriam-Webster dictionary actually defines it as “cold rice dressed with vinegar, formed into any of various shapes, and garnished especially with bits of raw seafood or vegetables”.1

In fact, sashimi refers to raw fish, while sushi refers to rice products. The term sushi merely derives from the word “sour” which refers to the rice that is mixed with vinegar and then molded into various shapes—rectangles, rolls, etc.

Notice that the definition states “or vegetables”. This accounts for why some forms of sushi can be suitable for vegans. Common vegan and vegetarian-friendly ingredients include pickled ginger, soy sauce, wasabi, and daikon radish or pickled daikon.2

Make no mistake about it: any dish (including sushi) that contains fish or any other animal or animal-derived product is non-vegan. If one eats sushi containing raw fish, then the person is a pescatarian—not a vegan. Full stop. So, sushi can be vegan, but the most common form of sushi, which contains fish, is non-vegan.

What we’ll do is go over the various non-vegan ingredients common in sushi, so you’ll know when sushi qualifies as 100% plant-based and when it doesn’t.

Again, sushi is synonymous with raw fish but is actually a Japanese dish that contains vinegared rice (sushi-meshi) and other ingredients like salt, sugar, fish, meat, vegetables, and even fruit. Styles of sushi vary quite a bit, but “sushi rice”(aka shari or sumeshi) is the one key ingredient.2

When one of the “other ingredients” is fish, the food product is rendered non-vegan.

Why does the presence of fish matter?

Veganism is defined as the practice of abstaining from the consumption and use of animals and animal-derived products, particularly in diet, though the practice rejects the commodity status of animals for any purpose, dietary or otherwise.4-6

Many ethical vegetarians do eat fish. I’m not here to say they are wrong to do so—I’m just saying that the practice makes one a pescatarian, not a vegan.

Pescatarianism is the practice of consuming seafood as the sole source of meat in an otherwise vegetarian diet.7

Most pescatarians are ovo-lacto vegetarians, which is to say that they also consume eggs and milk—though, some pescatarians do abstain from both eggs and dairy.

Fish is just one form of meat you’ll encounter in sushi products. Traditionally, sushi is made with white rice—though brown rice can be used—along with raw fish or some other form of seafood like eel, squid, yellowtail, tuna, salmon, or crab meat.

Some folks think that seafood is okay for vegans because it’s widely believed that shrimp and other small marine animals don’t have the capacity to suffer or feel any pain.

On the contrary, shrimp and other marine animals do have pain receptors and are thought by experts to be capable of physical suffering. Even bivalves have a peripheral nervous system which helps them respond to and avoid harmful stimuli.

Nociceptors are a type of receptor responsible for sensing painful stimuli, and their presence is just one of many pieces of evidence that an organism is capable of pain and suffering.

In nociception, thermal and mechanical stimulation of sensory nerve cells produces a signal that travels to the brain through a series of nerve fibers located along the spinal cord.8

The “rock and roll” is an inside-out roll that contains barbecued freshwater eel.

Nori is the Japanese name for a number of edible seaweed species of the red algae genus Pyropia, including P. tenera and P. yezoensis.9

The seaweed surrounds the filling, followed by a layer of rice. Other outer coatings are also common including ingredients like roe or toasted sesame seeds.

The fillings are often problematic for vegans. Not only do they tend to be fish and other marine animals, but the fillings can also include cream cheese, mayo, and other animal products.

Some vegans are primarily concerned with health and avoid fish and other marine life due to concerns surrounding the high levels of toxins in the food.

The CDC has long warned about the hazards of eating raw fish and shellfish. The bacteria, viruses, and parasites present in raw seafood pose several health hazards.

Foodborne illnesses often result from consuming raw seafood-containing sushi, and many pathogens present in the food lead to intestinal infections that are difficult to treat and often cause further complications.

At-risk groups include the very young, the elderly, pregnant and nursing women, and anyone with an illness that compromises the immune system.

As for parasites, raw fish are known to harbor worms (anisakiasis parasites). Certain practices like heating the food to 145°F (63°C) for a few minutes or freezing the fish to 210°F (14°C) for a week helps ensure their destruction.10

But, these practices are often not followed, which accounts for the infections associated with the consumption of seafood-containing sushi.

Certain shellfish like mollusks are especially prone to carrying contaminants because they are what’s known as “filter feeders” that inhabit shallow waters, which are more likely to polluted by bacteria, viruses, and chemicals.

Merely coming into contact with some raw seafood (i.e. without consuming it) is thought to put people at risk for Norwalk virus, V. cholera, Vibrio vulnificus, V. parahaemolyticus, and hepatitis A.11,12

There are several types of sushi rolls that are considered suitable for vegans. I’m sure it varies, but these are typically good to go. You’ll, of course, want to look out for any non-vegan condiments like fish sauce, oyster sauce, etc.

Thankfully, this one doesn’t contain actual caterpillar—it just resembles one. This sushi roll commonly contains rice, nori sheets, cucumber, and avocado. It can contain eel! So, not all versions of this one are vegan. But, I’ve run across many without seafood.

This one contains rice along with bamboo sprouts, and often fried tofu slices, so it’s usually vegan-friendly.

This one is just a roll of rice with a stick of cucumber in the middle. Can’t get anymore plant-based than that.

This one contains rice and pickled daikon. Daikon is a radish derived from a large slender white root.

This is a spicy sushi made with tender eggplant strips, garlic and chili paste and then rolled up with nori and sushi rice.

Sushi made with shitake mushrooms. These usually come as a ball of rice covered with a mushroom.

This sushi is made from umeboshi (pickled fruit), nori, shiso leaves, rice and often cucumber. The plumb paste imparts a very salty taste while the shiso leaf contributes a nice minty flavor.

This one contains natto which is a dish of fermented soybeans that has a pungent flavor and gluey texture. It’s a rare source of plant-based vitamin K2. The natto is wrapped in rice which is then wrapped in seaweed.

This is a type of sushi that comes as a pocket filled with sushi rice. The pocket is made with fried tofu.

That wraps it up for sushi (pun intended). Thanks for reading.